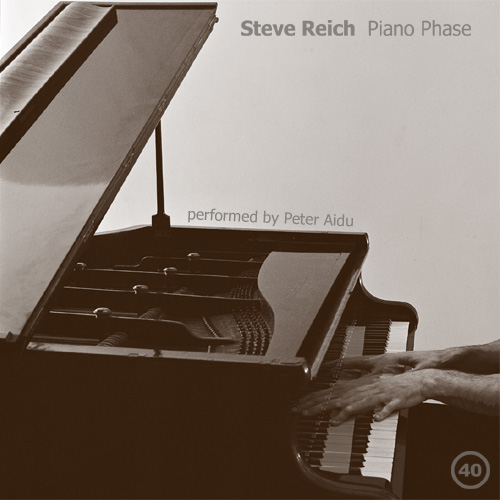 In 1967, Steve Reich composed Piano Phase - a piece of music for two pianos. It was his first attempt at applying the phasing technique to live performance. Two pianists are playing a rapid twelve-note melodic figure over and over again in unison. As one player precisely keeps the tempo, the other speeds up very slightly until the two parts line up again, but one sixteenth note apart. The second player then resumes the previous tempo. This cycle of speeding up and then locking in continues throughout the piece; the cycle comes full circle three times, the second and third cycles using shorter versions of the initial figure.

On October 2006, Russian pianist Peter Aidu performed this composition with an absolutely unique technique. While playing on two pianos, with a left hand on one instrument and the right hand playing separately on the second piano, he was recreating the sounding of two performers! This fantastic act was accurately recorded, and now is available exclusively on top-40.org.

You may also watch the video footage of this tremendous performance on YouTube.

@Altisidoran.petulance: Minimalist music is very different from minimalism in other arts, as it isn't so much about being minimal as it is about having things in different proportions which may make certain aspects seem minimal to an untrained ear. For example, a melody that would normally last 7 seconds is played over the course of an hour with an immense amount of new information put within that melody. It is "minimal" because of the fact that your melody/time ratio is very small, but I'm sure you can understand how you could just as easily call it "maximalism." For minimalist music, "minimalism" is purely an arbitrary label. Additionally, while it is extraordinarily difficult to perform this piano with one person on two pianos, it is humanly impossible to do so with one hand on one piano. That is something Liszt wouldn't have been able to do even if you gave him 30 years to master it.